As the first direct flight from China smoothly landed in Edinburgh, Scotland the new visitors must be asking themselves where they should visit .

Edinburgh is the second only to London as the most popular UK destination for Chinese tourist, according to Gordon Dewar, the chief executive of Edinburgh Airport. Also, more than 10,000 Chinese students are currently studying at Scottish universities. 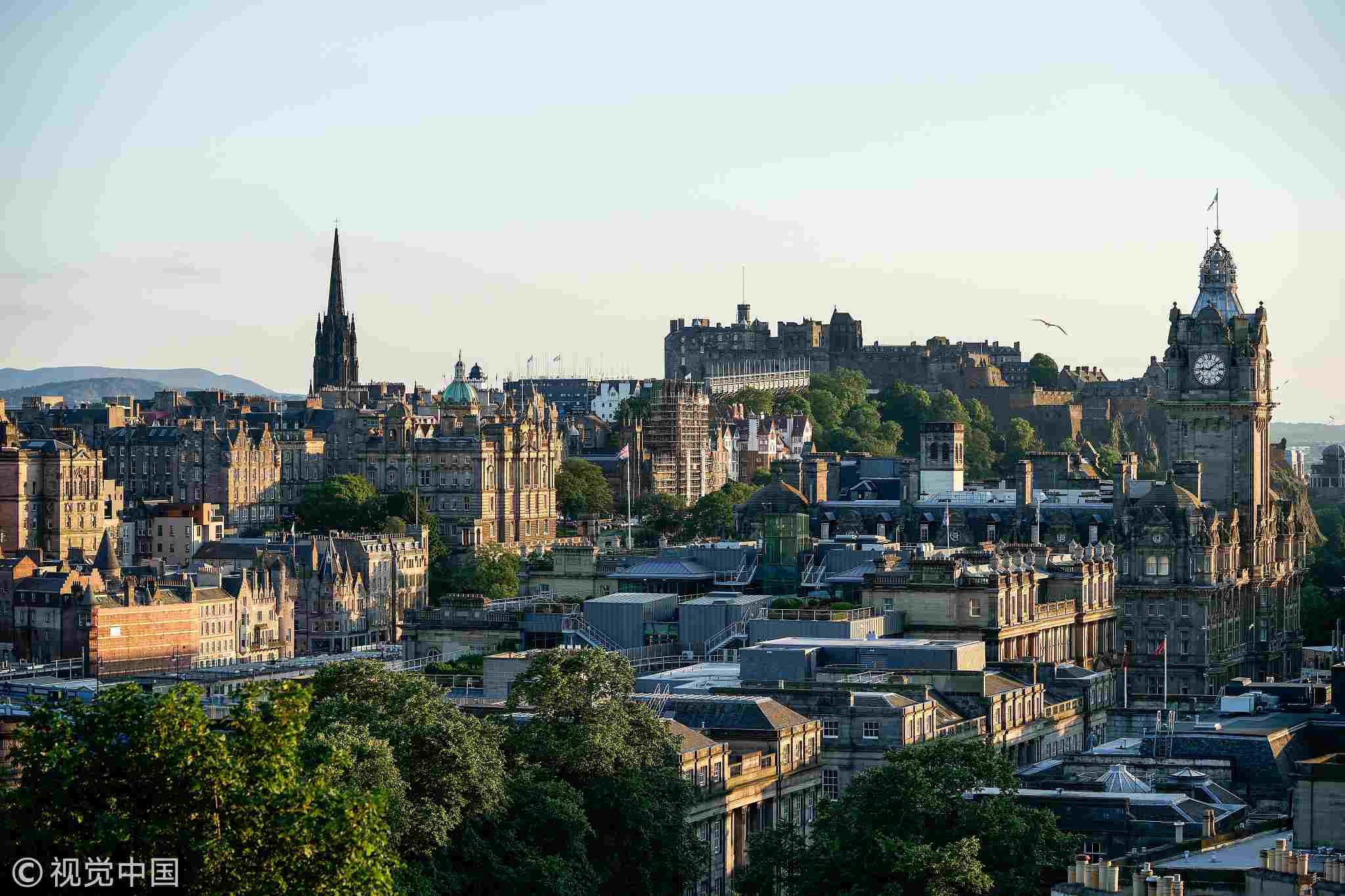 Recognized as the capital of Scotland since the 15th century, Edinburgh is the seat of the Scottish Government, the Scottish Parliament and the supreme courts of Scotland. The city of Edinburgh is divided in two by Princes Street Gardens. From the Old Town’s medieval street layouts and tenements, to the 18th-century New Town’s financial district, the city offers a respective but harmonious view. Take our five castles tour and visit 5 amazing ancient castles of Scotland .

Edinburgh Castle is a historic landscape which dominates the skyline of Edinburgh, Scotland. /VCG Photo

Located high on Castle Rock and dominated the view of the Old Town, Edinburgh Castle has played a pivotal role in Scottish history, both as a royal residence – King Malcolm Canmore and Queen Margaret first made their home here in the 11th century – and as a military stronghold. It also was involved in many historical conflicts, making it an iconic place for the Kingdom of Scotland. Today it is one of Scotland’s most atmospheric and popular attractions, allowing the tourists to revisit history with present-day perspectives. 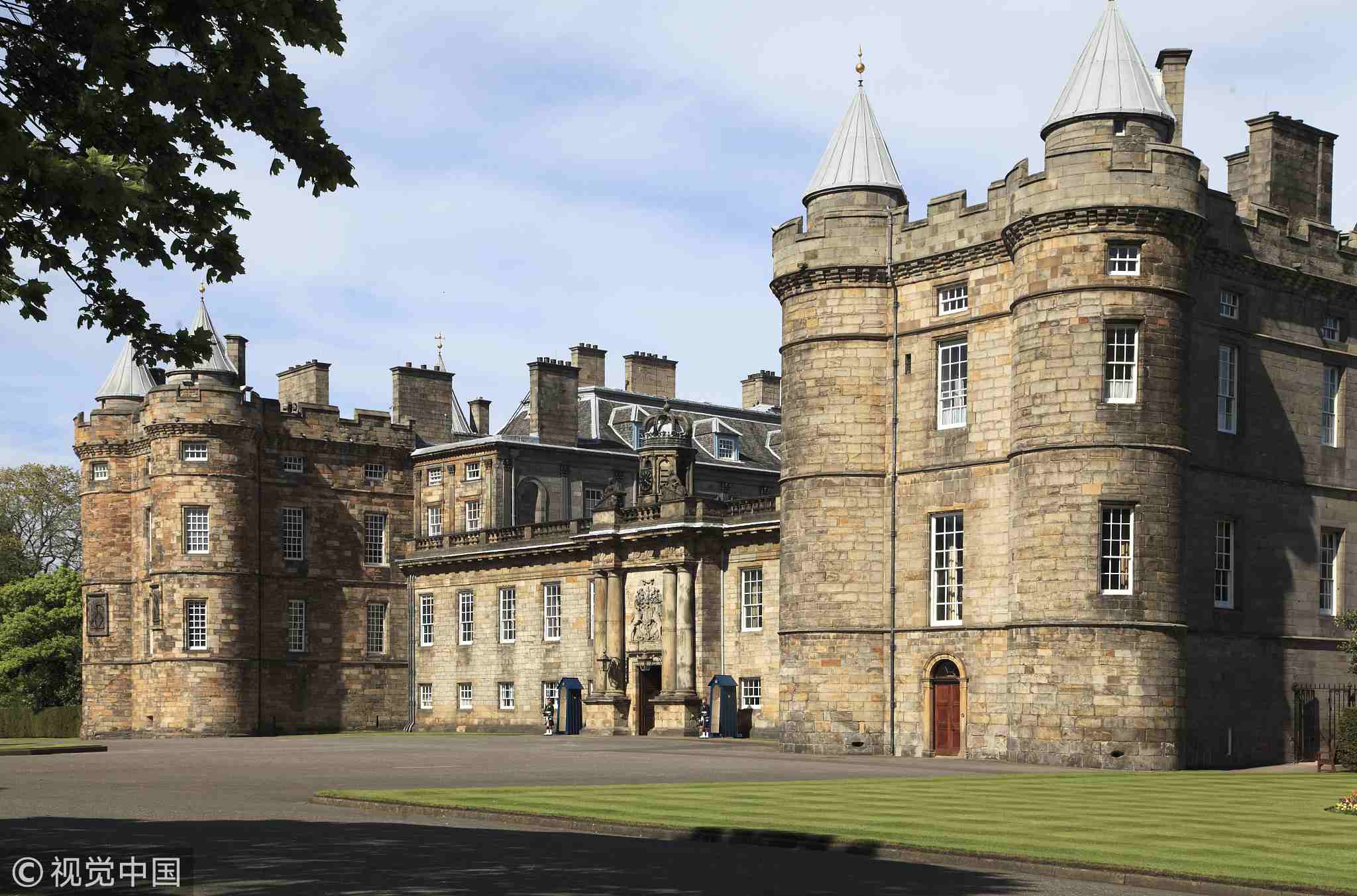 The Palace of Holyroodhouse is the Queen Elizabeth II’s official residence in Edinburgh and the home of Scottish royal history. /VCG Photo

Situated at the opposite end to the Edinburgh Castle, this palace is the royal family’s official residence in Scotland but is more famous as the 16th-century home of the ill-fated Mary, Queen of Scots. Taking a self-guided audio tour, you may find yourself immersed in the stories of Mary. The best bedroom of Queen of Mary in Scotland, the famous 16th-century murder scene of Mary’s secretary David Rizzio and the ruins of the Holyrood Abbey may bring you back to the era of the mid-16th century. 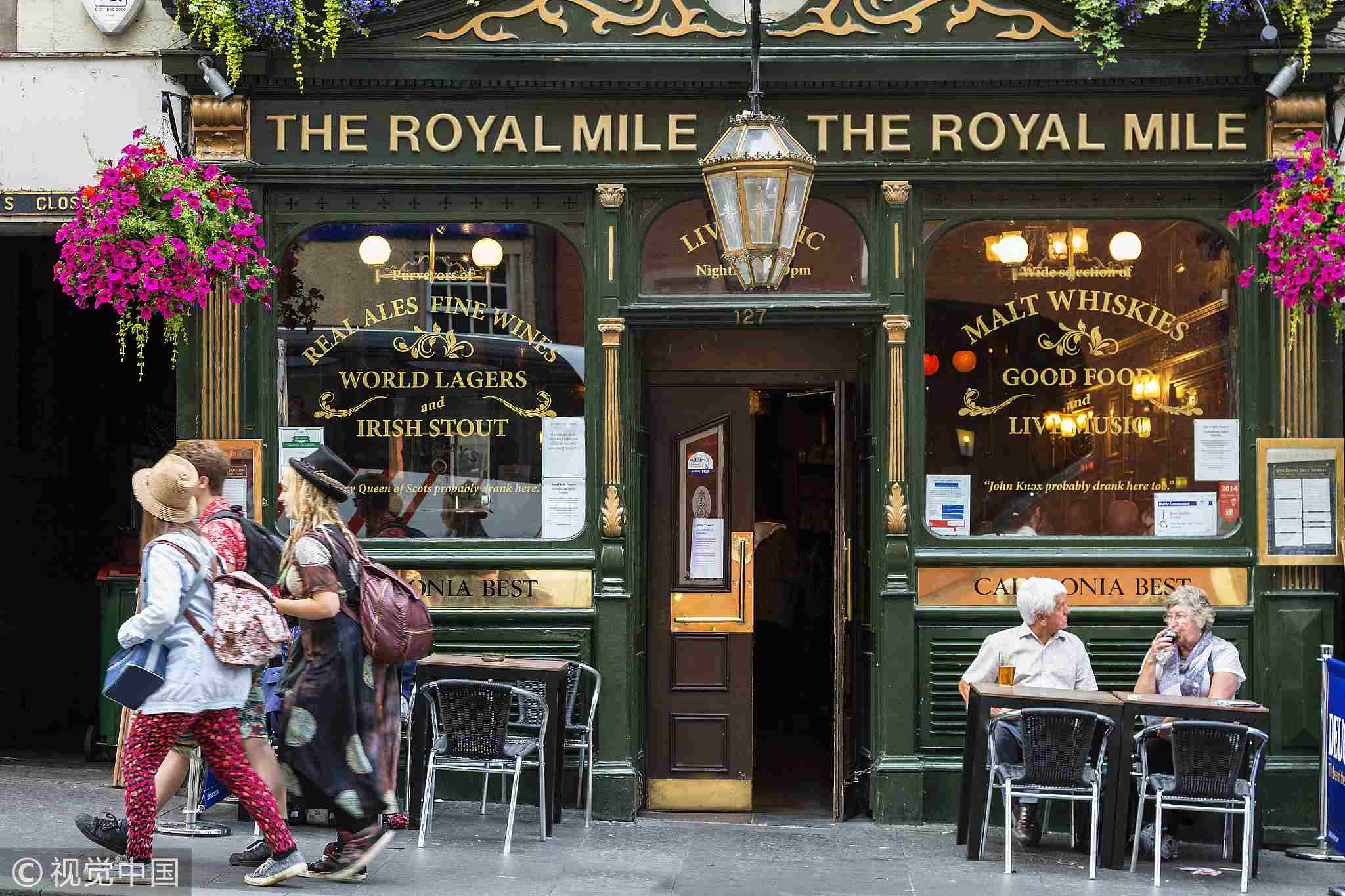 A restaurant alongside the Royal Mile in Edinburgh. /VCG Photo

The Royal Mile runs through the center of the Old Town, connecting the Edinburgh Castle and the Palace of Holyroodhouse. Alongside the Mile, tourists can visit numerous historical sites including the St Giles’ Cathedral and some of the best eating and drinking spots in the city. You may feel the heartbeat of this ancient city by walking alongside the Mile. 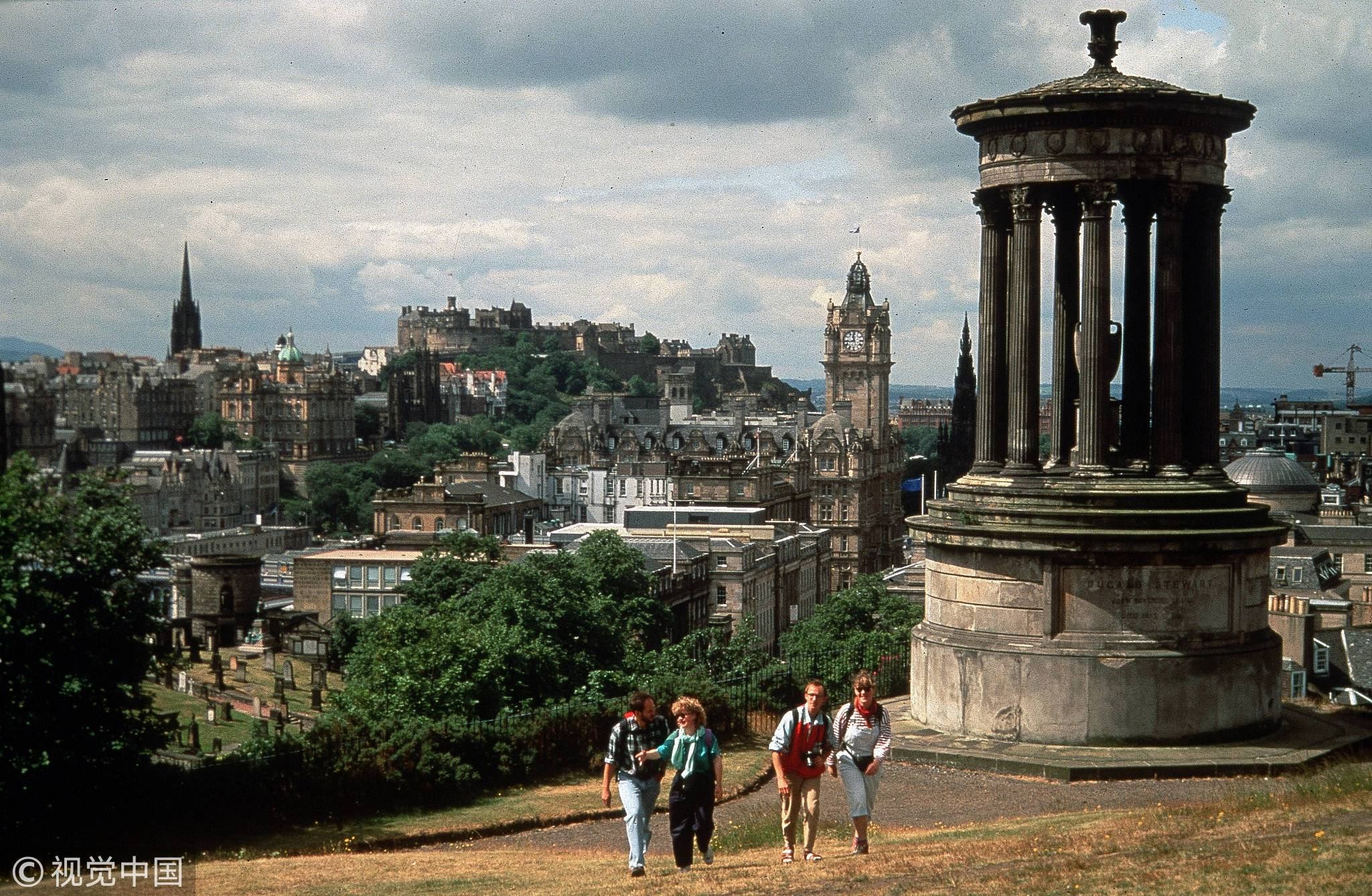 If you’re visiting Edinburgh and want some great photos of the city, there is nowhere better to get them than Calton Hill. /VCG Photo

The Calton Hill is a hill situated at the east end of the Princes Street, providing you panoramic views of the whole Edinburgh city. The top of Calton Hill is a usually quiet place and is easily accessed. It takes no more than five minutes to get to the top of the hill through the staircases. By the way, don’t miss the sunset here. This place is included as one of the top five locations to photograph an Edinburgh sunset.

If you’re a Harry Potter fan, no trip to Edinburgh would be complete without searching for a little bit of Harry Potter in Edinburgh. 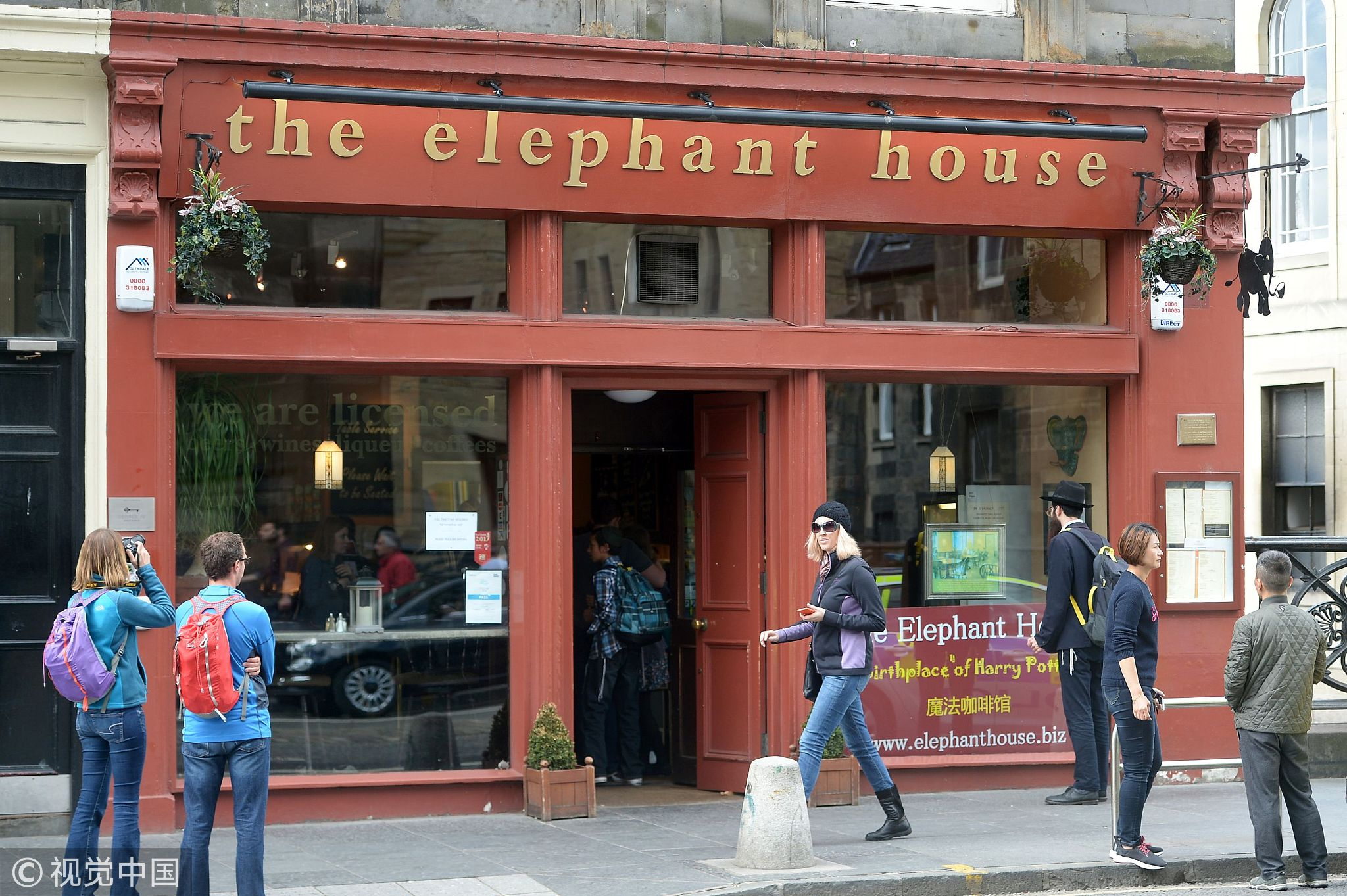 The Elephant House in Edinburgh is where J.K. Rowling penned the Harry Potter books. /VCG Photo

The Elephant House is a self-proclaimed “birthplace of Harry Potter,” where J.K. Rowling started her writing of the story. If you step into this café, you will find the store itself has nothing to do with Harry Potter. However, your visit isn’t complete without a trip to the restrooms. The white walls are covered in Harry Potter-themed graffiti, everything from raunchy HP jokes to heartfelt odes to Rowling. The cafe used to crack down on these scrawls, but it’s now accepted, and people will not stop doing this. 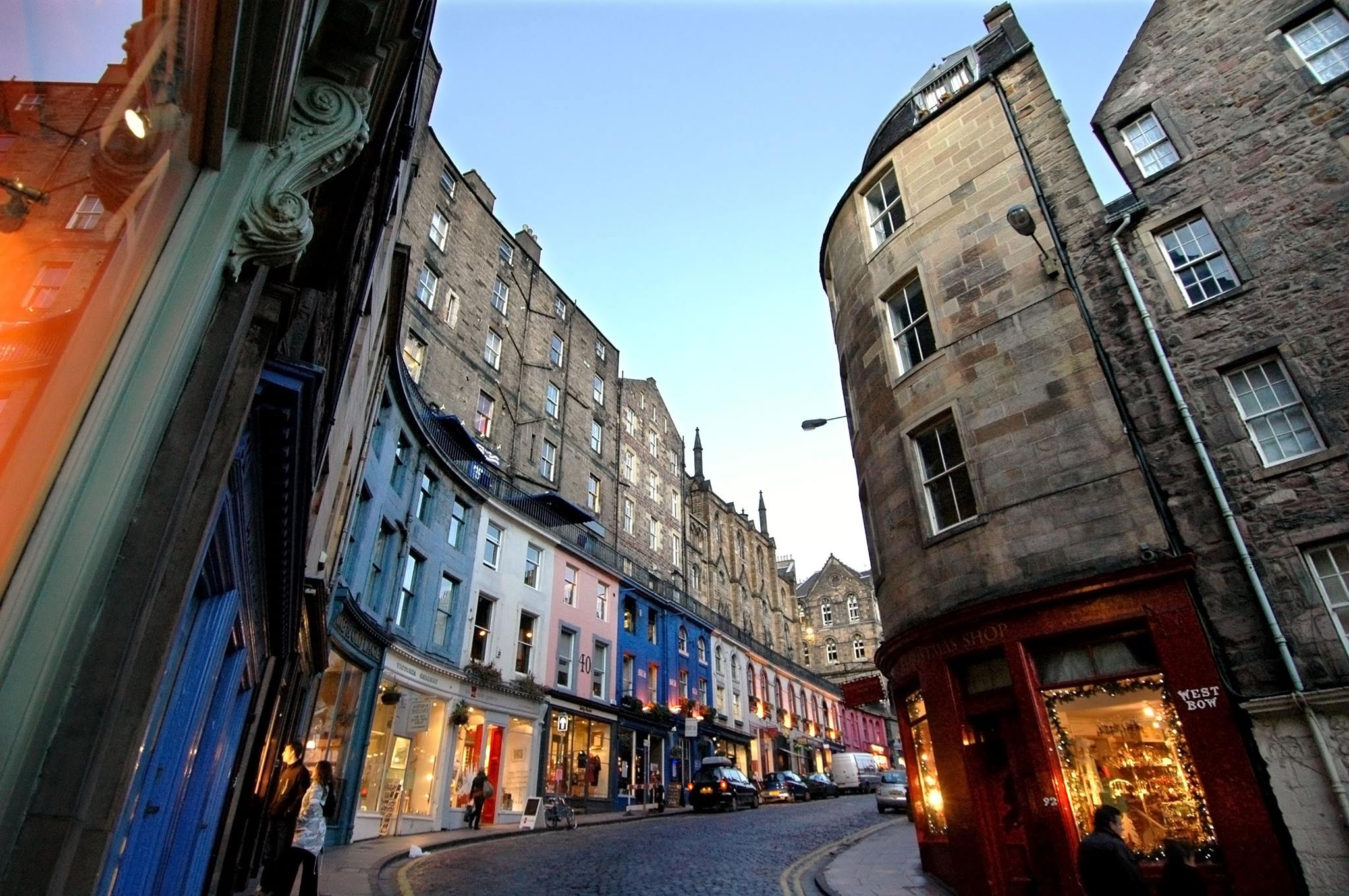 Lined with candy-colored shops, this curving cobbled street happens to be the main inspiration for Diagon Alley in the book. Victoria Street also featured in the Avengers Infinity War film.

Shops such as novelty joke shop Aha Ha Ha Jokes and second-hand bookstore The Old Town Bookshop should not be missed. Even muggles can see the similarities between the real-existing shops and the ones in the magic world.

Drummond Castle Gardens, Perthshire, doubles as the palace of Versailles in the series Outlander.

Drummond Castle Gardens, near Crieff, Perthshire, doubles as the magnificent pleasure grounds of the French royal palace in a new episode of time travelling drama Outlander.The grounds, which date back to 1630, are considered “the best example of formal terraced gardens in Scotland”.

Now they feature in VisitScotland’s new online guide to Outlander locations.The map contains 11 new sites which feature in the second series of the drama, based on the bestselling novels by American author Diana Gabaldon and starring Caitriona Balfe and Sam Heughan.Much of the action in the second series of Outlander is set in France, where the Frasers take on a new way of life after leaving Scotland.

The stunning grounds date back to 1630

However, locations such as Drummond Castle Gardens — as well as Gosford House in East Lothian, Glasgow Cathedral and Dysart Harbour in Fife — served as ideal substitutes for French scenes.
Drummond Castle Gardens, which are protected as a category A listed building — in contrast to the B listed castle — already attract thousands of visitors per year, and are included on the Inventory of Gardens and Designed Landscapes in Scotland.The gardens — complete with peacocks — feature ancient yew hedges and the remaining beech tree planted by Queen Victoria in 1842.But the grounds — which also featured in 1995 feature film Rob Roy, starring Liam Neeson — could now see a huge boost in tourist numbers thanks to the so-called “Outlander effect”.
Fans from throughout the world flock to filming locations.Head gardener Edith Barnes said: “The team here puts a lot of effort into making the gardens look their best and we’re delighted that fans of the series got to see them on screen in all their glory.”We hope visitors will see the hard work for themselves and maybe even be transported to another place and era through their beauty.”Outlander centres around Claire Randall, a World War Two combat nurse living in the 1940s with her husband Frank. On a second honeymoon to Inverness, Claire goes to a stone circle and is mysteriously swept back in time to the Scottish Highlands in 1743.

She meets a young Scottish warrior, Jamie Fraser, and falls for him, leaving her torn between her 18th and 20th century lives.Although the storyline moves to France in the second series, Scotland still provides much of the stunning scenery.Fans of the hit Sony Pictures TV show can follow in the footsteps of Jamie and Claire and visit locations shot in regions such as Dumfries and Galloway, Fife and and The Trossachs.The new map is VisitScotland’s biggest ever guide to Outlander sites, and also includes 18 locations from series one.